The American Contract Bridge League (ACBL) has just published the seventh edition of the official Encyclopedia of Bridge. This year’s publication coincides with the ACBL’s celebration of its 75th Anniversary. The format of this edition is completely different from any other edition, which in the past resembled a version of a “fat” dictionary. This one is quite revolutionary having larger print, many photographs (previous printings had none), and is in an attractive, newer coffee table size. In addition, it is organized in a completely different way and is very user friendly. For the first time it has an index instead of cross referencing, and instead of all the items being presented in alphabetical order, this time the items have been separated into chapters.

It is very inviting to pick up and flip through. One can read one chapter or browse through a particular area of interest and then put it down. One chapter on cheating intrigued me. I learned about cheating at Sidney Radner’s knee and heard many interesting stories on the subject from his lips (Sidney Radner was one of the world’s experts on card cheating and crooked gambling and of course the leading expert on Houdini).

I am proud to say, I received my copy of the Encyclopedia as soon as it became available to the public and was very moved that it was autographed by the Editor, Brent Manley, (who is also the editor of the ACBL monthly publication, THE BRIDGE BULLETIN) as well as Tracey Yarbro, co-editor and Curator of the newly created ACBL Bridge Museum, located in Horn Lake, MS. 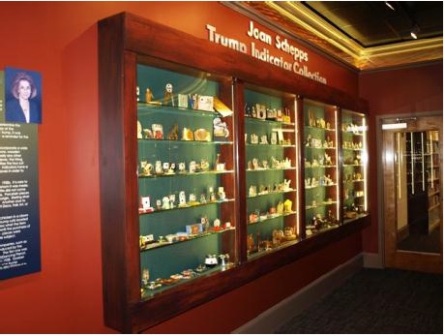 The Encyclopedia opens with Chapter 1 – HISTORY OF THE GAME OF BRIDGE AND PLAYING CARDS, and surprise of surprises, pages one and two were written by Tom and Judy Dawson. Yes, our own 52+Joker members. There is another section on BRIDGE GADGETS and under that topic is a lengthy write-up of Trump Indicators with several indicators from the JOAN SCHEPPS COLLECTION of Trump Indicators which is on permanent display at the ACBL museum.

Chapter 5 features the ACBL MUSEUM with many pictures; one of which is the wall of the Schepps Trump Indicators exhibit.

Another 52+Joker member mentioned in the Chapter on MUSEUMS is Gerard Hilte. Gerard created The Dutch Bridge Museum about 30 years ago. It is located in Leerdam, in the western part of the Netherlands. This museum has more than 1500 bridge books, thousands of bridge magazines, a large collection of trump indicators (from the collection of deceased 52+Joker member Ray Seldis) and many collections of scoring devices, playing cards and just about everything else card related. Several years ago, Elihu and I went to Amsterdam to meet Gerard and his wife Sari and I cannot say enough about their gracious hospitality. Not only did they invite us to their home, open the museum for us on a Sunday (and let me wander through it to my “heart’s content”), visit their bridge club in Utrecht, but also they took us on a tour of the Dutch Bridge Federation. Of course I thought I was in “Bridge Heaven”!

This year as part of the celebration of the ACBL’s 75th year anniversary, the 2012 National Bridge Tournament will be held March 15-25 in Memphis, TN, located a stone’s throw away from the ACBL National headquarters and their Museum in Horn Lake. The ACBL will be running complimentary buses between the tournament host hotel and the Museum. I know the Dawsons visited the Bridge Museum on their way home from the 52+Joker Convention when it was held in New Orleans.

Below is a museum rack card which describes the museum and which will be distributed at ACBL tournaments. If you ever have an opportunity to visit this museum, even if you are not a bridge player, don’t miss it. It is a gem.