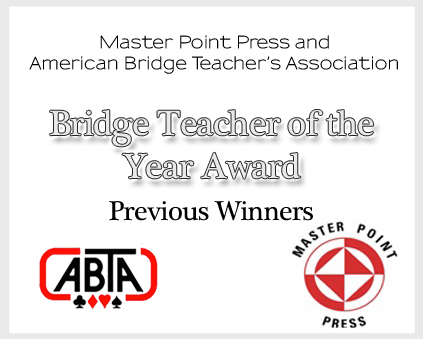 As I was putting together materials to support this year’s Teacher of the Year contest, I started wondering how winning this honor might affect the teacher in question. So I asked a few previous winners of the award and Kathie Walsh (2011 winner) and Dave Glandorf (2013 winner) were kind enough to answer a few questions about what it was like to win and what happened afterwards.

For Kathie Walsh from Hilton Head, South Carolina, it’s been a few years since her win. She was our 2011 winner and I just had to make sure that I included her kind comment: “I want to thank MPP for this wonderful opportunity — it has definitely altered my teaching life.”

Being nominated had Kathie feeling “blown away” and winning left her “walking on air for about a year.” According to Kathie, “local media covered the event, and then our bridge club framed some of these pieces, which hang in [the Hilton Head Island Bridge Club] club today.”

As far as long-term effects of this honor are concerned, Kathie cites a boost of confidence that her teaching style was working and, of course, “[her] classes were packed.” And with good reason, the only thing she’s changed since winning is that she’s “done more hands-on techniques,” which, she says, “I think the students love.”

Fortunately, Kathie is still able to play in her local and regional tournaments each year, despite her heavy teaching schedule. So look for her at the Hilton Head Island Bridge Club in South Carolina and learn from a winner.

For Dave Glandorf of Houston, Texas, it hasn’t been that long since he won in 2013. He was first nominated in 2010, the inaugural year of the award and says that he was “truly surprised and honored and humbled that my students felt I was deserving of this high recognition.” When it comes to winning, he adds that “it was also very satisfying and exhilarating.”

What sort of effect has winning had on his life? Like Kathie, Dave says that it’s given him more confidence in his teaching program, that he “must be doing something right.” There was also a “Dave Glandorf Day” held in October by the Clear Lake Bridge Club (his local club) which celebrated and recognized Dave’s “accomplishments and contributions to the club.” Fortunately he’s not letting it all go to his head, trying to “remember that [he is] still the same person [he] was before receiving the Teacher of the Year award.”

In terms of his teaching techniques, class enrollment, or personal playing, Dave hasn’t seen much change. He says, “Perhaps I play with a little more confidence, but I’ve been playing this game for over 50 years so I don’t think anything except continuing study will affect my play all that much.” He still plays at the CLB Club twice a week, mentors a monthly game on Thursday mornings and tries to play in any special games the club holds and the Houston sectional tournaments. And he “always [schedules his] classes around the Houston Lone Star Regional, so [he] can spend the better part of the week there.”

When I asked both Kathie and Dave if they would recommend that other teachers seek nomination for Teacher of the Year, they both agreed whole heartedly. Kathie said “A definite YES—it’s all positive.”

Dave had a bit more to say about the whole process, adding, “Win or lose (I lost three times before winning), it is a great experience. For one thing it forces you to sit down and collect data and information about what you have done in the bridge world and evaluate your teaching methodology. So this can lead to a little self-evaluation process that might give you more insight into ways you can improve your teaching skills and curriculum. And if you do happen to win, receiving the award is a very gratifying and uplifting experience as well as a significant recognition of your accomplishments.”

We couldn’t put it much better than that. Nominate your teacher and show them how much you appreciate all the effort that they put into teaching you this wonderful game! You can find out more about the nomination process on the ABTA’s website.

Special thanks to Kathie Walsh and David Glandorf for their feedback about the ABTA Teacher of the Year award.