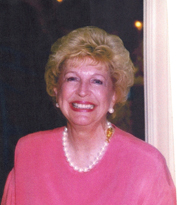 Let’s see… I must have been about 6 years old. My parents loved to play bridge, and they would have friends come over. My mother was a good cook, so she always made cakes and cookies and so forth, and I would sit under the table and listen to my parents bid and play the game. When I was a little bit older, about seven or eight, I used to sit in my father’s lap and he’d let me play the cards. So that was when I first started playing bridge.

I first started playing duplicate in Sacramento. I was a teenager, and one of my first teachers was Maggie Alcorn, who was the women’s national champion at the time, she was listed in the Encyclopedia of Bridge, and I was very much in awe of Maggie. She taught me very, very well, took me right to the basics, and gave me a very good background in bridge. So that’s how I got interested.

As far as teaching… Maggie had taught me and I was playing with her for several years, and then she became ill. She had a lot of classes to teach, and she asked me to take over her classes, and I said, “I couldn’t do that, I just couldn’t!” and she said, “Gloria, there’s no one I would trust to teach my classes but you.” So I started teaching Maggie’s classes, and I found out that I liked teaching very much.

I’ve always thought that bridge should be fun. I teach with an accent on having a good time. I also believe it’s very important for the students to get the basics of bridge. Too many students start out with a lot of conventions, and they never get the background of bridge, so I teach the basics first.

Anything in particular you do to encourage an enjoyable atmosphere?

I keep it light. I make sure I have laughter during the class. I usually tell them funny stories to get them relaxed, so that they’re able to learn a lot better.

I teach a great deal on cruises. I once taught an English gentleman by the name of Peter Freedman. He owned a string of department stores in England. When he came aboard ship he was in a wheelchair. He had a nurse with him, he was unable to stand, and he couldn’t lift his head. But he told the cruise director, “I love to play bridge!” He hadn’t been able to play lately because the club he belonged to had a long flight of stairs. But I told the cruise director “don’t worry, I’ll take good care of Peter,”

I played with him as his partner. There was another English couple that played there too, and after lessons, every afternoon, I would play a game with him and we had a wonderful time. I noticed that after the first few days he was starting to bring his head up a little bit, and then he was starting to laugh, and he was starting to enjoy the game. And then the night before the cruise was over—it was a two-week cruise—he said, “look at this Gloria!” and he stood up at his wheelchair, waved his nurse away, and walked by himself to the men’s bathroom and back. And everybody was so taken with that, we all applauded when he came back. It was a wonderful experience.

That whole summer, I kept in touch with Peter. He liked to do bridge puzzles, and so I’d make up bridge puzzles and send him one a week, and he’d either work it out or he’d write me back, saying, “Gloria, this is too tough!” I told him that I had another cruise leaving from England the following summer, but his wife called me and said, “Peter can’t make it, he’s too ill.” So I went to board the ship that summer, and all of a sudden I get a tap on my shoulder and it’s Peter. And he said, “I wanted to surprise you!” So for that cruise, the whole day, every afternoon I would play bridge with him and he laughed and had a wonderful time, and when he left I gave him a hug goodbye. When I called to see how he was a couple of days after I got home, I discovered he had passed away the day after he got home. His wife said it brought him through the summer knowing he was going to play bridge with me on the ship again. I thought that was very touching.

Your husband, Bill, also plays bridge. How did you meet?

We met at a health spa. My daughter’s baby had just been born, and I needed to rest, because I’d been taking care of my daughter.

Well, my husband’s daughter had just had a baby and he wanted to go to a spa to rest, and that’s how we met. He didn’t play bridge, so he enrolled in bridge classes, and I taught him to play right from the beginning, and now he’s a very fine player. He’s a Life Master. He’s my favourite partner.

Do any of your children or grandchildren play bridge? (Between them, Gloria and Bill have six children, eleven grandchildren, and one great-grandson.)

Well, my daughter plays bridge, and my grandson… he was four years old and I was reading to him on the sofa and the phone rang. It was one of my students and I talked to her for awhile, then I sat back down to continue reading to him, and he said ‘grandma, don’t read to me anymore, talk bridge to me!”

The others have been shying away from the game.

How do you balance your working life with your personal life?

It works very, very well, and one of the reasons is that my husband loves to play bridge just as much as I do, so if we’ll have a free evening or something he’ll say, “well let’s invite some folks over, we’re gonna play some bridge here at the house.” And we like to go to a local duplicate club. Everything seems to balance out. He buys and sells real estate, so he keeps busy, and so do I. We have a pretty busy life, and then of course we travel a lot.

Have you seen any change in bridge teaching or playing over the years?

There’s been a lot of changes. I think the biggest change is by Mr. (Marty) Bergen. The Bergen raises, have you heard of those?

It’s a way of bidding with a lot fewer points than you would have ordinarily bid, and I believe it’s the wave of the future, counting the trumps in your and your partner’s hand, rather than the points. (Bergen) wrote a book called Points Schmoints! that I thought was very interesting. And I think that’s coming toward the future of bridge.

Do you think it’s for the better?

Yes I do. I like his theories. And I play them myself.

What part of bridge do you think is most important?

What makes you say that?

Because an opening lead can either make or break a hand. You lead the wrong suit and they’re going to make it, but if you give a lot of thought to the bidding and open with the right suit you can set many a hand that you’re unable to set otherwise.

I think my favourite is Opening Leads, by Robert Ewen. And then I would say Bill (William S.) Root’s books come second.

Do you have any advice for other teachers, especially new ones?

Know your craft. Be sure you know all the answers before you teach the first lesson, because someone’s going to ask you about a squeeze play in the middle of the first lesson. (Laughs.) So have your lessons well prepared, and be sure to answer every question your student asks, because it’s important and a lot of teachers kind of wave it away—“I’ll answer the questions later”—and sometimes later the student has forgotten the question they were going to ask. So I suggest that you keep lessons casual and answer questions as they come up.

You once hosted a TV show, “Play Bridge With Gloria.” Could you tell us a bit about that?

Certainly. It was 13 programs, and each covered a part of bridge. I started at the beginning, very, very basic, and went through takeout doubles, pre-emptive bids, and opening leads. I had four people sitting at a table, and I would just teach them as I would be teaching a class. When they’d ask questions I would answer them, and we would go through one lesson at a time. It was a lot of fun.

How did you pitch the show?

I was being interviewed by a television program because I had written a new book, and then when I was leaving a program manager came out and talked to me and said, “have you ever thought about having your own show?” And I said “no, never occurred to me.” And he said he liked the way I had photographed and he liked my presence, and he was interested in putting one together. And I said, “well, that’s good.” We started talking, and he said, “well, either we can find your sponsors and then we would own the show, or you could get your sponsors yourself and then you would own the show.” Well, I decided to get my own sponsors, and I did, I got some really really good ones. I got a restaurant, a jewellery store, and a doctor’s office; I had four altogether. And after the show was finished, after the reruns, I made it into a video, and I sell that on my website.

How many episodes of the show were made?

How did that work?

I had two sets of episodes filmed: first seven, then six. There were about five years between the two of them, and it hasn’t been on for five or six years now.

Have any bridge players recognized you from your show?

One afternoon… we were on a cruise, and we stopped in London for a couple of days, and while we were there I played with my husband at the Cavendish Club. When I walked in, everyone said, “oh, there’s Gloria! There’s Gloria!” I thought, “how in the world do they know who I am?” They had watched my television program the night before. So that was really fun.

Where else have your travels taken you?

Have you ever been afraid on any of your travels?

On my last trip, aboard the “Silver Whisper,” the captain announced that we would be going through the “Gulf of Aden.” He said there were known pirates in that area and proceeded to tell us how to react in case of a chase.

The captain said he would sound the bell with five short blasts, then everyone should hit the floor. The pool was emptied and everything in the dining room was tied down: china, crystal, etc. It seems there is a fast zig-zag maneuver that the ship uses and it is very hard for the pirates to catch us. Everyone was ready and willing to help, but it wasn’t necessary. There were two different pirate ships, but they gave up chasing us. There was a full page article in USA Today about our ship and the pirates. And to answer your question, no! I had absolute faith in our wonderful captain.