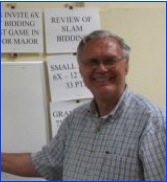 I entered Iowa State University in the fall of 1958 and joined a fraternity. Bridge was a popular campus activity in those days and there was always a game or two going on in the lounge before and after meals and on weekends. I came from a card-playing family, but bridge was not one of the games we played at home. So it is somewhat strange that it was not until the spring of 1959 that I finally became interested in this new game. Of course, once I started, I was hooked.

During my career with Lockheed (now Lockheed-Martin) in Houston from 1967 – 1998 I was actively involved with their in-house training program and played lunch-time bridge almost from the start. So, education and bridge have long been a part of my background and interest, although not always paired together. In fact, while in grad school at Iowa State, I had a part-time teaching assistantship. When I finished with my PhD in 1967 I was given the opportunity to stay on as a faculty member, but decided it would be better if I had a few years of industry experience first. Well, I had really exciting projects to work on at Lockheed, and my teaching interest was satisfied with my in-house training classes, so I never did go back to the academic environment.

In my early lunch-time bridge adventures, I had the opportunity to expand my skills and learn a lot, especially from one of the players who was quite experienced. As personell changed, my role in the game changed. Eventually it became a learning experience for all involved, but I became the guru of the game. So, I guess that is really when I first started teaching bridge, be it very informally. Not being historically minded, I can’t really say exactly when that was, but I would guess sometime in the mid 70’s. I do recall that my bridge partner and I actually taught a few after-hours bridge classes at Lockheed sometime “way back when” for a few employees who were interested in learning. This, of course was all done on a volunteer basis.

After I retired in 1998, one of my goals was to play more bridge. As it turned out, I actually played less! My wife and I have two married daughters who live out of town, so we spent more time traveling to visit their families than before I had retired. But I could see a need for formal classes for new players if we were to grow our local club. One of the other members shared this vision, so together we took the ACBL accreditation course in 2002 (maybe 2001) and started holding classes shortly thereafter, team-teaching. My current records go back to 2002. Eventually, I took over the effort myself.

Most anything by Marty Bergen, but especially his two Shmoints books. I would also include Larry Cohen’s two books on the Law of Total Tricks, and Max Hardy’s books on Two Over One Game Force and Competive Bidding with Two-Suited Hands. Of course, my all-time favorite was Sheinwold’s Five Weeks to Winning Bridge. It took me more like five months, but it was probably the single most important book to improving my game. Unfortunately, it really isn’t that appropriate anymore in today’s world of 5-card majors.

THINK BRIDGE, DON’T MEMORIZE BRIDGE – I have been using the ACBL Bridge Series for my classes since I started teaching bridge formally. A few years ago, I realized that the students were really having trouble memorizing how many points were needed for various bids. After analyzing this problem, I realized that most of this memorization is entirely unneccesary if you just THINK. I have since instituted the idea to ask the following question: Do we want to be in a game contract? (Simplified to Game? in my classes.) The answer will always be one of the following: yes, no, or maybe!

While this may seem trite, it is actually very easy to apply just by looking at your hand and understanding the message you partner gave you. Yes, there are still a few things to be memorized, but not as much as the textbooks suggest. A second question, with the same possible answers is: Do we have an 8-card fit in a major suit?

Take yourself down to the students’ level. Remember that you have many years of experience and much of what you do automatically is completely foreign to a beginner. Maintain a sense of humor. Give the students time to think! Always remember that before you complete a sentence or question, you already know the implications or answer. Give the students time to process what they hear. Never embarass a student. Keep your cool. Be punctual. Keep a database of your students and the courses they have taken.

What inspired your costume for “the Hold Up Play”? Do you find this helps your students?

I’m a Texan! I wasn’t born one, but I got here soon as I could. Being a cowboy at heart (in mind and spirit if not in practice), the wild west has always intrigued me. (Yes, I was a Gunsmoke fan.) So it was kind of natural to think of a short wild west skit to provide a little levity to the classroom environment. I know it helps to lighten the mood and get them to relax a little. I can only hope that they remember the principle involved, although I have gotten a little positive feedback in that regard.

Editor’s Note: For more on the infamous Hold Up Play, please visit our Facebook page.

The Take-Out Double. It is the most efficient call in Bridge. You get to “bid” three suits with one call and you don’t take up any bidding space! Now, you are probably thinking this is not a convention. Well, in modern times it isn’t considered such, but at one time all doubles were for penalty.

In terms of modern conventions, my favorite is probably Stayman. Even though some of my social players may have heard of it, or even know how to use it, they find there is so much more to it than they imagined.

Why do you think bridge is beneficial for seniors to get involved in?

Many of my students are seniors. Some played bridge 30 years ago or so, and some are completely new to the game. I think there are two main reasons they want to learn the game. One is because it is a social experience. They now have time on their hands and want to do something to meet new people and have fun at the same time. The second is as a mind stimulator. Many have heard of the advantages bridge has in keeping the mind active and delaying or preventing many mental problems associated with the elderly. Of course none of my students are ‘elderly’ and won’t be for another 10 years! (People aren’t ‘old’ unless they are at least 10 years older than you.)

How do you go about preparing your lesson plans?

For the most part I use the ACBL series, so I have the wonderful groundwork of Audrey Grant and Betty Starzec to draw on. But I always review the material before class and frequently make additional notes on things I want to emphasize or have a slightly different opinion on. I have taught the three basic classes over 20 times each, so I have those down pretty well by now. But I rarely go through an entire course without making some minor tweak to inprove my presentation.

We’re told you have taught 1810 students since 2002! That’s pretty impressive! How do you spread the word about your classes?

First, let me clarify the numbers here. The total enrollment in all of my courses since 2002 is 1810 (somewhat greater now since I have taught additional courses since I first submitted the information). But, since many students take more than one course or even repeat some (more than once in a few cases), the number of distinct students is much smaller, close to 500.

I actually have very little to do with getting the word out about my courses. I have a distinct advantage in that my courses are offered through the Clear Lake Bridge Club, which is owned and operated by the members. The club has a voluntary publicity position who is responsible for all advertising. Our main method of reaching the general public is through local monthly newsletter publications in our and surrounding communities. We can sumit an article regarding our games and classes free of charge. My course schedule is also on our club web site and I get a few inquiries from that. Of course, word of mouth from students, former students, and players is always great.

I’m really excited that they have renewed or taken up an interest in this great game. They can take all the classes they want and read all the books they can get their hands on, but they will never learn the game until they start playing! I’d like to thank them for all their suggestions, comments and support.