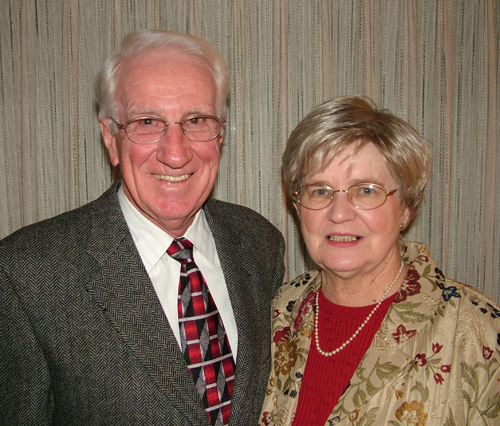 We started playing bridge when we were first married 51 years ago. A fellow schoolteacher and his date used to visit at our house. They played bridge and decided we should also learn. They taught us the rudiments one evening and gave us a copy of Sheinwold’s Five Weeks to Winning Bridge. The following weekend we played at another teacher’s bridge party. From then on we played on and off until 1980 when we started playing duplicate. We started teaching in the ’90s when a club owner asked Carolyn to teach for her (I was still working). I retired in 1993 and we both attended an Audrey Grant workshop to become accredited teachers. We joined ABTA and later became “Master Teachers.” We work together on cruise ships. I do intermediate lectures and she teaches beginners if the ship wants both. Currently we are running 9 1/2 tables of Easybridge!.

Easybridge! is a copyrighted program of instruction that is specifically geared to quickly incorporate students into duplicate games. The program requires that students get four free 2 to 2 1/2 hours lessons which are high energy, fun and possibly informative. I phrase it that way because it does not use “formal” instruction. They play hands right away the first week. Week two they play several hands using duplicate boards that move to the lower direction. Week three the boards move lower and the players move to the next higher table and we use travelers to record the score. Week four we incorporate not only travelers but pick-up slips, score the results, announce the winners and award masterpoints. In just four weeks they are playing a novice duplicate game.

Our teaching philosophy is to use the “hands on” methods espoused by Grant. Almost all our teaching is with cards on the table with the students moving cards around to show different problems.

The “hands on” method involves no black or white board and no flip charts. We call out the hands and the students put them on the table. We then discuss the bidding, opening lead and possible play. We emphasize planning before play. We then can move cards around to change the situation slightly. For instance if the first example was to open a five card major we can move the cards so the opener holds only four cards in the major suit and must open a minor. Now the responder will hold the four card major and will bid it and be raised by the opener and the bidding will stop in a part score or proceed to game. A different opening lead would probably be made and the play would change because the declarer is the other partner. The same method will work with any subject. The students are always involved and don’t get bored. They also play the hand after the discussion of the bidding and opening lead. They are always doing something and not just listening to one of us drone on. I even use this method on cruise ships, with many tables attending the lectures. The only difference is that one does not have the same time frame to develop the subject.

Have your lessons changed at all in the decade and a half you’ve been giving them?

Our methods have not changed much over the years since we were trained by Audrey Grant, and we continue to use her materials mostly. When we develop our own course we tailor it to use the methods we are familiar with and think are the most successful.

How do you and your wife’s teaching philosophies differ (if they differ)? Have you ever taught a lesson together?

My wife and I have the same philosophy and teaching methods. We have done lessons together occasionally, but not very often.

Cover less material. The students don’t care if you cover everything. They don’t know the difference. Also, you are an entertainer, so make it fun. I tell jokes and try to keep it light.

My favorite books are anything by Grant or Seagram, but I am enjoying reading Julian Laderman’s new book, A Bridge to Inspired Declarer Play.

What is the age of your primary group of students?

Most often our students are retirees. Right now I am running an Eaybridge! program and the vast majority are seniors, although a couple of people are middle aged.

What do you feel the game has to offer senior players?

While we would like to be teaching bridge to younger players, teaching seniors is gratifying. They are ready to learn. They want to learn. Some have lost spouses and are looking to fill voids in their lives. Others have friends that play and they want to get in on the fun. Most or many are newly retired and looking for an activity.

Have any of your senior students played bridge before, or do they learn the game cold?

Some have taken lessons before or played a long time ago, dropped out and now want to get back to the game. It is inspiring to us to have them back.

Aboard one ship two opponents got into a heated argument about a revolk and one fellow called the other a cheater. Another time there was a dispute about whether a slam was made of down one. Of course the partners of the two arguing did not offer any help. Most of the time cruising is wonderful and the people are very nice although as players, they are often not as good as they think they are!

Sharing the game and our bridge experience. When students say they’ll never be good players and start to become discouraged, I tell them I have played thousands of hands and have made the same mistake twenty times. It is my experience that gives me a chance to avoid making it the twenty-first time. Hopefully this helps them see that it is the playing experience that will help them become better players.