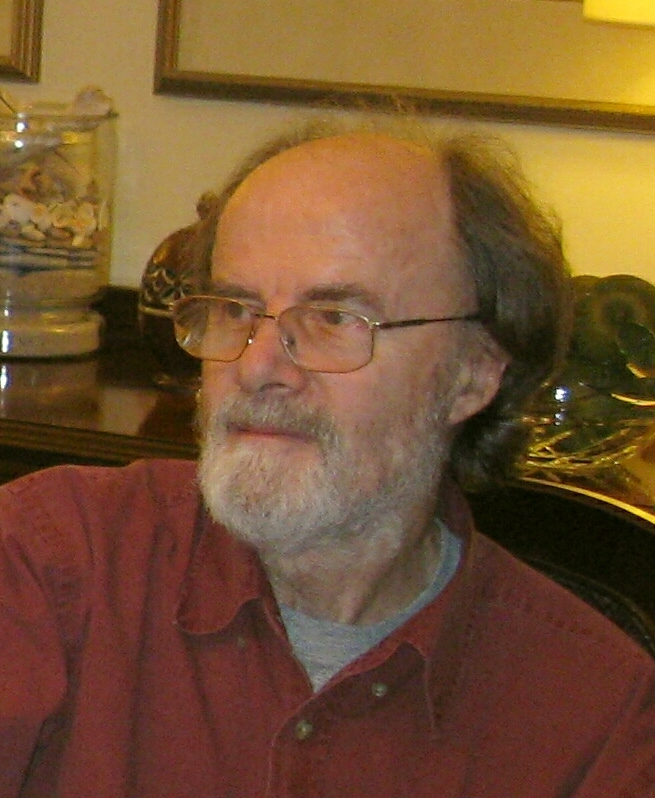 Ken Allan is the author of our most recent bridge fiction book, Shades of Grey (no, not that one). Allan’s Shades of Grey is a sequel to the well-received Deadly Endplay, called “A riveting work of mystery and bridge” by the Midwest Book Review.

Allan hails from Kingston, Ontario, and is an expert bridge player and an accomplished gardener. Here, Allan tells us a bit about himself and his novels, sharing his thoughts on cheating in bridge, and the challenges of attracting young people to the game.

Why and when did you start playing bridge?

I come from a game-playing family. My father was killed in WWII, leaving my mother with three children (I was the oldest). When I was eight, we moved to the family farm, (east of Thessalon, near the north shore of Lake Huron) where my mother kept house for my grandfather and two uncles. Every year, aunts, uncles and cousins spent most of their summer with us on the farm. I played checkers with my grandfather, monopoly with my cousins and a variety of card games with adults and children. Bridge was primarily an adult game, but I played once in a while when the adults needed a fourth. This was kitchen bridge at its lowest level.

After graduating from Queens University in 1962, I worked in Kingston for a year. During that time, my cousin Garry and I read Goren’s Bridge Complete and then went out to play at the Kingston Duplicate Bridge Club. We won our first game, which gave us an inflated opinion of our ability—It was some time before we won again. For the next five years, I played duplicate occasionally and taught beginner bridge classes at night school. When I met my wife Paddy, I taught her how to play and bridge has been a significant part of our social life ever since.

These days, we play an average of three club games per week, a few sectionals and regionals and we have travelled to the last five Fall Nationals – the Spring and Summer Nationals would interfere with my gardening.

Has your approach to the game changed much over time?

I have always been optimistic and aggressive in bidding, play and defense. Every few years I have to resolve to be more conservative.

What drew you to bridge fiction, and bridge mystery, in particular?

I did a lot of reading: literature and popular fiction, mysteries, and technical books on gardening and bridge. It seemed to me, in the 1970’s, that bridge fiction was about people who played bridge but were not shown in action playing actual hands. Or it was one hand after another (sometimes quite entertaining) and there was no connecting plot. I worked sporadically on a bridge mystery that would bridge the gap. After many revisions, I self-published Deadly Endplay in 2008.

How have you grown as a writer since that first edition of Deadly Endplay?

I took Suzanne’s advice to heart most of the time. She taught me to be more visual, to use more dialogue and to expand scenes where I was leaving too much up to the imagination of my reader. I feel that she helped me make both books much better.

What are some of the differences readers will find between Shades of Grey and Deadly Endplay?

In Deadly Endplay there is an accidental death with some unanswered questions. A particular bridge hand is relevant to some of those questions and an evening of duplicate is used to flush the quarry. The bridge club is at the centre but the crime is committed elsewhere and the investigation moves outwards from the club into the surrounding town and country. In Shades of Grey the crime involves bridge itself so there is a great deal of introspection and discussion of bridge itself.

In Shades of Grey, you look at the dynamics and psychology of cheating in bridge. Why did you decide to focus on this topic?

Bridge is clearly the best of all the social games. Unfortunately, it is easy to cheat and cheating is a cancer. For some players (like Ray Lee), the presence of cheaters in high level competition is so disturbing that it takes all the fun out of the game. For most of us, the challenge of the competition is so satisfying that we play the game despite the knowledge that some of our competitors probably have an unfair advantage. I personally think that while cheating is easy, and while some of the lesser ‘shades of grey’ are difficult to avoid (even for sincerely honest players), conscious planned cheating is less pervasive than it seems and honest players outnumber the cheaters by a very large margin.

Have you had any experiences with cheating in bridge?

I have played (in tournaments) against players who were later discovered to be cheaters. Also, I have been accused of cheating by players who were unable to cope with the Precision system of bidding that I play with most of my regular partners

Your setting in the Pemberton Series is a unique one. You describe your setting as “a fictional town wedged into an actual landscape located north of Bruce Mines and east of Sault Ste. Marie” [the Algoma district]. Why did you choose the Algoma region as a setting for your novels?

I think I chose Algoma as a location for Pemberton because I already knew the history of the area, so creating a physical and historical backdrop for my story was easy.

In some ways, the history of Algoma parallels the history of contract bridge. Algoma was a pioneer society in the late 1800s. Electricity did not arrive in rural Algoma until the 1940s. Highway 17, the Trans-Canada highway, was not paved until the 1950s.

Whist and other early forms of bridge became popular in the late 1800s. The rules of Contract Bridge were laid down in 1925 by Harold Vanderbilt and were rapidly accepted over the next five years. Duplicate bridge clubs became common in the 1940s.

These parallels were not on my mind when I created Pemberton but one of my characters, Jim Campbell, noticed this in Deadly Endplay (p 38-40).

What’s next for you? Are you thinking about a third novel?

I am having health problems (connected with my Parkinson’s) at the present time. If I am able to regain something close to normal function, I will probably write a third Pemberton novel. One idea that I am playing with is to have a plot that revolves around system building. If I did that, I would try to organize a few two-session Sunday games where there were no system restraints. This would have a very limited appeal to the majority of club players so I would have to talk players into coming from some distance to participate. This would be a chance for bridge players who have tinkered with illegal conventions to give them a test run. I would also encourage some of the players of legal systems who think there is no benefit to the banned convention make up 1/3 to ½ of the field. I would arrange for a recorder at each table to record the bidding and the play and at the end of the game the participants would be provided with a complete record of the bidding and play of all the deals.

Speaking about the bridge world in general, what do you think is the greatest challenge facing bridge clubs and bridge players today?

The average age of active bridge players continues to get higher. A small part of the reason for this is that modern medicine is keeping us alive longer and the majority of bridge players are able to play well into their old age. That is the good part.

The main reason is that very few young people are taking up the game. To reverse this trend, the ACBL initiated a program for teaching bridge in primary and secondary schools. It introduced the game to thousands of young people. Unfortunately, just one in every thousand became active players. There may be a benefit from that program that will start to show up in another decade or two – most of the new players that are taking up the game at the present time are middle aged people who are nearing retirement and are looking for an activity that they can do now that the kids are out of the nest and they have more free time. As the kids from the school programs reach that age, some of them may remember the bridge program.

Why do you think young people are tending not to stay with the game?

The most popular bridge system in North America is Two over One. To the best of my knowledge, that is the system that is taught to all beginners at the present time. Within the 2/1 framework there are many conventions and treatments. Most duplicate players find that the choices allowed within the 2/1 framework are quite sufficient to be creative. Furthermore, they do not like to have to contend with weird bidding. Still, the restrictions on creativity cool the enthusiasm of some of the most promising young players.

In the early days of contract bridge, it was much easier to make creative improvements to bidding systems than it is now. A creative club player has zero chance of being allowed to invent conventions or drastically change the meanings of opening bids. Even world class players must jump through hoops to be allowed to play something new and they are not always treated fairly when they defend their proposals.

I don’t know whether the restrictive policy of world bridge organizations is good in terms of the number of players who take up and stick with the game. But I am positive that some of the most interesting young players go elsewhere.

Both of Ken Allan’s novels are available in ebook formats. To learn more about Ken Allan’s books or download Shades of Grey or Deadly Endplay, please visit his author’s page on ebooksbridge