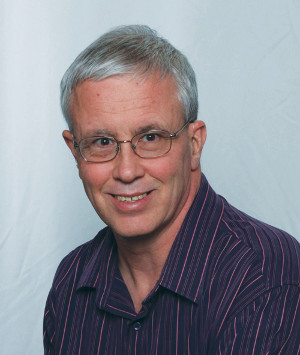 During a recent conversation with bridge teacher Sue Treble, we thought it would be a good opportunity to chat with her husband, author and teacher Bill Treble, as well.

A former civil servant, Bill’s retirement years have been dominated by writing about, reading about, playing, and discussing bridge.

He chatted with me from his Winnipeg home.

What about bridge appeals to you?

Well, my wife made a comment about a week ago that I very much like the social aspect of it.

To give you some background, from junior high until the first part of university I played chess, which was another mind game, but there’s very little social interaction. Like, when you’re making your move the other person is supposed to be quiet so you can go through your thought processes, and similarly when the other player is making his move you need to be quiet for him.

Now the same applies to bridge – but a typical bridge hand is over within about five or ten minutes, and there are anywhere between twenty-four and twenty-seven hands during the game, so there’s an opportunity to converse between hands, whereas in chess there isn’t really an opportunity to do that, and it’s not viewed as desirable to do so. So I like that social aspect of bridge.

The other thing I like about bridge is that you have a partner you get to communicate and be on the same page with, whereas in chess it’s just you against your opponent, so in that respect bridge has a social and communicative aspect built into it that chess does not.

So that’s why I gave up chess and took up bridge instead.

Can you tell us a bit about your latest books?

Well, Defending at Bridge: A first course is my second book – I had my first one, Getting Into the Bidding, published about four years ago. The topic of the first book was competitive bidding, and the topic of this book is defense, so that’s when your opponents are playing their hand and you have to try and defeat their contract.

The target audience for the book is kind of intermediate level, so I talk about the first thing, which is the opening lead, and then go into how two partners can cooperate on defense and send signals to each other during the hand using the cards they play.

I actually didn’t intend for it to be a book – I’m also a bridge teacher, and I teach eight-week lesson series on various topics. So about two years ago I put together this series of lessons on defense, and sent the documents that I created for my lessons to Ray Lee, and he decided that it would be good material for a second book.

And what about your most recent book, Two-over-One: A first course?

Most 2/1 books just deal with the mechanics of the system and don’t go into the whys and wherefores, so in the new book I try and explain the rationale in addition to providing the technical details.

One thing I tend to focus on in one of the chapters is major-suit raises.  There are ‘destructive’ and ‘constructive’ three-card raises, and 1NT followed by a jump in opener’s major, which is a three-card limit raise.  Some people tend to get fixated on high-card points when choosing these actions.  There is a very fine book from the early 1980s, Bobby Goldman’s Aces Scientific. He was a member of the Dallas Aces team, which reclaimed the Bermuda Bowl after a long period of Italian dominance in that event.  In his book, he talks about ‘cover cards’ when evaluating your hand in support of partner’s major.  I’ve tweaked the idea slightly and used it in distinguishing between the types of supporting hands.

I also mention the reasons why 2/1 has replaced Standard American as the most favored system even among club players. Just as five-card majors supposedly made auctions easier than when everyone played four-card majors, 2/1 removes the uncertainty about whether a bidding sequence is forcing or merely invitational.  There is, however, a price to be paid for gaining this advantage, most notably when a 1NT response to 1H or 1S is a one-round force rather than 6 to 9/10 without support and therefore passable.

So are these books basically your bridge lesson planning material?

Not quite. Ray asked me to expand on the material and include a few more hands, and I did so.

Why did he think they would make a good books?

Mostly because some of his authors cover more advanced material, like for expert bridge players, while some others target people with limited experience in bridge. He thought what I had would be good for players who had been playing for a few years, but were still entry-level.

Makes sense. Do you teach with your wife, Sue?

Sue and I teach separately. There are a few things that we do together – we do a supervised bid and play together on Tuesday evenings, but mostly I teach on average about one or two classes per season, while she does teaching for the University of Winnipeg and other locations than where I would teach.

Do you approach teaching differently?

Not really. Sometimes she uses my material, and sometimes I use her examples, so our teaching style is fairly similar.

My philosophy with teaching is to have students using the cards as often as possible. Like, most teachers will have an hour of instruction and an hour of practice hands, and for some teachers the instruction part of the lesson will be just writing examples on the whiteboard, or in a PowerPoint presentation.

What I tend to do is even during the instruction part of the lesson, I’ll have my students handle the cards and place the teaching examples face up on the table. I find that to be more effective, it gets them into the flow of the lesson.

You can visit ebooksbridge.com to see Bill’s ebooks and more.