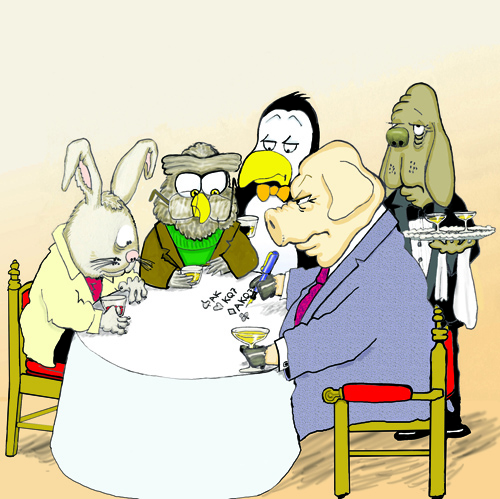 A dentist-turned-cartoonist who picked up his current mantle at the ripe young age of 48, Bill Buttle has been contributing his drawings to the ACBL’s Bridge Bulletin the better part of two decades, in addition to illustrating various Master Point Press releases, including Victor Mollo’s Bridge in the Menagerie, Diamonds Are the Hog’s Best Friend, Swings and Arrows, and Last Call in the Menagerie; his own collections, Out of Hand… Out of Mind and Out of Hand… and Off the Fairway; and MPP’s new September 2016 release If I Only Had a Heart: Bridge over the rainbow.

I chatted with the 77-year-old Buttle on Sept. 17 at his Arnprior, Ontario home, which he shares with his wife, Linda.

Though I usually research my subjects before chatting with them, I wasn’t able to learn very much about Bill in advance.

Can you tell us a bit about yourself?

Well, I spent most of my professional working career as a dentist, which is probably why you haven’t heard very much, until it gradually drove me bananas and thoroughly burned me out. I just came home at noon one day and I said to my wife Linda, “I cannot go back,” and didn’t.

What made you want to take up cartooning?

I’d always enjoyed cracking jokes, and sketching. I never did much with it, but it was the one thing I enjoyed when I was in the lower levels of school and they’d have an art class. But I never, ever did get any formal training in drawing.

So at the age of 48 when I walked out of my office I thought, ‘I’ve always wanted to try cartooning.’

I started teaching myself to draw, and I happen to have had great success with it – not in terms of financial returns or anything, but it’s certainly been a much more satisfying thing to do with the rest of my life. I gradually worked out a nice position with the American Contract Bridge League, and now I do most of their cartooning for the magazine. I’ve produced enough to put out a few books of my own, and that was how we arrived here.

If you don’t mind me asking, how did you manage financially?

Two ways. Linda, who is a physiotherapist, went back to work and became the major breadwinner, which gave me time to develop my skills without totally crippling our finances – so she deserves credit for making it all possible, both for that and for the buckets of encouragement she lavished on me.

I also drove a school bus for fifteen years, which brought in a few bucks and left the majority of my day free for cartooning endeavors. I quite enjoyed driving the school bus, actually, and only quit when, at age 65, it became too bothersome to hang onto the special drivers license.

Our two boys, Jonathan and Andrew, now in their forties, were far enough along in school to allow it as well.

How did you learn to draw? Looking at your work, I can’t tell that you didn’t have any formal training.

Trial and error. (chuckles) I’ve been developing for a while. It was in the late 1980s when I quit dentistry.

So you’ve been practicing for a good 30 years.

Yeah. It took a while – I often look at a few of the early things I drew, and wonder why I ever kept on with them – but it really was just putting things together, seeing what parts I liked and what parts I didn’t. I think that’s how a style in any endeavor develops, from looking at what you’re doing and eliminating what you don’t like.

I still have in my possession a book that I put together to submit to a syndicate, and I was doing that fairly early on – though as I say, I look back at some of the stuff I was drawing then and wonder why anybody ever wanted to use it, because it strikes me as being pretty awful now. (chuckles) But you have to go through that stage. You have to develop your technique.

Have any artists inspired you?

Other cartoonists I admired. I think my most compelling one would have been Jim Unger, who drew Herman. When I first saw Herman cartoons I thought, ‘Oh boy, that guy has it together.’

Lynn Johnston would be another obvious pick. I was able to meet with Lynn a few times when I was developing my technique, and she was quite helpful and encouraging.

I’m glad to hear that.

She was living outside North Bay then, and I spent a day with her at her home. She was a very gracious lady – very helpful – and knew what to try for to make the cartoons more effective, so I owe her a debt as well.

Any other tricks you’ve learned before arriving where you are today?

Well, I always keep a basket of stuff I’ve drawn on the kitchen counter. People would come into the house and have a look through them, and very early I got into the habit of saying, “Tell me what you like and what you don’t like,” even to the point of adding, “Grade them for effectiveness!” I had a lot of my friends go through them and tell me what was working for them and what wasn’t.

It helps a lot to know what appeals.

Can you tell me about your syndicating career?

I had a couple things for a while, just drawing on a weekly basis.

How did that get started?

I had a nice connection with Miller Features Syndicate in Toronto – the people who carried Lynn Johnston, though they were associated with the much larger Universal Press Syndicate and have since been absorbed by them. It was pleasant, but I wasn’t looking to do it on a daily basis, and the weekly papers weren’t flourishing at the time, so they weren’t selling enough.

It was the CEO of Miller, Richard Vroom, who introduced me to Lynn.

Did you ever attempt a daily?

I did for a little while and it was just… (chuckles) totally non-restful.

What were your syndicated cartoons about?

The one that got around the most was called Two’s a Crowd, and it was just a husband and wife – very middle-aged, ordinary people, and the things they themselves got into. Some of them I put together in a book of cartoons that I published myself. I’ve also drawn on a monthly basis for a little newspaper in Almonte, Ontario, which does an Arts and Entertainment section, and I’ve developed a cartoon called Art Beat for that. It’s still going. I’ve got two books’ worth of stuff from that.

How did you connect with the ACBL?

(long pause) I’m trying to think of when that all began… it was certainly a long time ago. My association with the ACBL started with me putting out cartoons for their Bulletin…

So you are a bridge player?

Yes I am. Both my wife and I are pretty involved in duplicate bridge.

How did you get started?

Well, it’s one of the things to do in a small town. In recent years it’s been the only thing (chuckles). I need a walker to get around, and bridge is not too demanding physically, so it’s been well suited to the situation.

Do you know where Arnprior is?

No – given the area code, I assumed Ottawa.

Yeah – Arnprior is on the Ottawa River, and in fact the western border of Ottawa is about a mile from where I live. Good place to be – it’s easy to get into the city, and has all the niceties of country living.

Sounds lovely. How long have you lived there?

Well, we moved to Arnprior in 1967, and I’ve always been an Ottawa Valley boy – I grew up just ten miles from here – so it’s nice to be around home.

Is your wife from around there?

How did you meet?

Well, Linda went to school in Ottawa when she was younger, and her roommate at school was an Arnprior girl, so she used to come up here on holidays and had always thought that she’d like to live here, and it was through mutual friends that we met.

Back in 1967, it was our centennial project to get out of Ottawa, which is where I was practicing then, and move out to Arnprior. We’ve been here ever since.

What attracted you to bridge?

I started in university. It was every university student’s favorite way of getting out of work in those days.

I like… having to use your head to get into other heads. It’s hard to explain the attraction, but it’s always been there, and has just grown over the years.

Makes sense. So how did you begin contributing cartoons to the ACBL Bridge Bulletin?

Well, by the time I started submitting work to them, we were playing bridge sufficiently to have joined the ACBL, and we were getting the Bulletin, and I realized… There’s one other gal in Canada who has done a lot of bridge cartoons and that’s Jude Goodwin out in BC. I had seen some of her work in the ACBL Bulletin and thought, ‘Well geez, if she can do it, I can do it,’ and started sending stuff to them, saying, “This is what I’m doing, would you like to run it in the magazine?” They quickly responded saying yes, and I’ve been popping something in there every month ever since.

And I’m guessing that turned into your current relationship with Master Point Press?

Well, in the course of my work with the ACBL it became obvious that Master Point Press is the publisher for most things bridge, so when the time came that I had enough of them for a collection I got a hold of [MPP co-founder] Ray Lee and sent him a few samples, saying, “This is what I’m doing, would you like to do a book?” He got back in touch and said sure, and off we went.

How did you get involved with the company’s latest release, If I Only Had a Heart: Bridge over the rainbow?

That was Ray Lee getting in touch with me and describing the situation as he thought it would work well with my art style, and asking would I be interested? And of course I said yes, and I’m very happy I did, because I think the book’s turned out very well indeed.

Before we go, can you tell me a bit about your kids?

What can I say? Since I became a cartoonist, both have attained university degrees, and although Jonathan now uses his, and teaches at the college level, Andrew studied yoga after obtaining his degree in geology and never hammered a rock professionally. He and his wife Shannon live in Taiwan and teach yoga full time there. They are bilingual in English and Mandarin, and are the parents of our only grandchild, Sofia, who at age three is also bilingual.

What did Andrew and Jonathan think of your career change?

I think it was important for them to see it happen to me: To see me go from the wreck that I was when I left my dental office – I really was pretty close to totally losing it at that point – to becoming something where life is enjoyable and I’m moderately successful at what I do. I’ve always made a point of telling them, “Make sure you do what you like doing.”

Yeah. I’ve had a much happier second half of my life, and I think it’s affected both of them, for which I’m glad.

This interview has been edited and condensed.

For more information about Bill Buttle, or to make a purchase online, please visit his author page on ebooksbridge.com.