Many of you have a favorite deck of cards or even several decks which I’m sure give you a great deal of pleasure every time you look at them. I often find myself looking at my collection of trump indicators and cannot describe the joy I derive from it. I never tire of viewing it, appreciating the diversity and creativity of the many pieces. I have always felt that one’s collection should be on display where it can be viewed often, rather than stored in drawers or packed in boxes.

I have been asked numerous times where I keep my collection of trump indicators and how they are displayed. For a long time that was a problem. They were casually scattered on book shelves, placed on end tables or exhibited on small display racks randomly placed where there was space. However, when the size of this collection grew to 300 then to nearly 600, it was time to organize properly and give it its own special home. As a result we built an entire wall of glass-enclosed shallow shelves with lights. Fortunately, the trump indicators for most part are small in size.

It has always been important to me to display this collection attractively, with enough space between each indicator so it does not look like storage. I’m not sure why, but every time I have tried to arrange or rearrange the trump markers it seems I instinctively group them together by category. All the flips are on one shelf, the figurals are together, the porcelains on another shelf, mechanical, bakelite, folk art, sterling, card boxes, pencils, score pads, animals, sports etc. are all in groups. This helps to show the variety of execution in a particular category. It is also interesting to me that regardless of the size of this collection, I can locate any one piece in a matter of seconds.

We all have a tendency to cherish that special piece that makes our heart flutter or gives us butterflies in our stomach. I would be hard pressed to select just one, but I certainly have at least 20 which take turns being in my TOP TEN list. 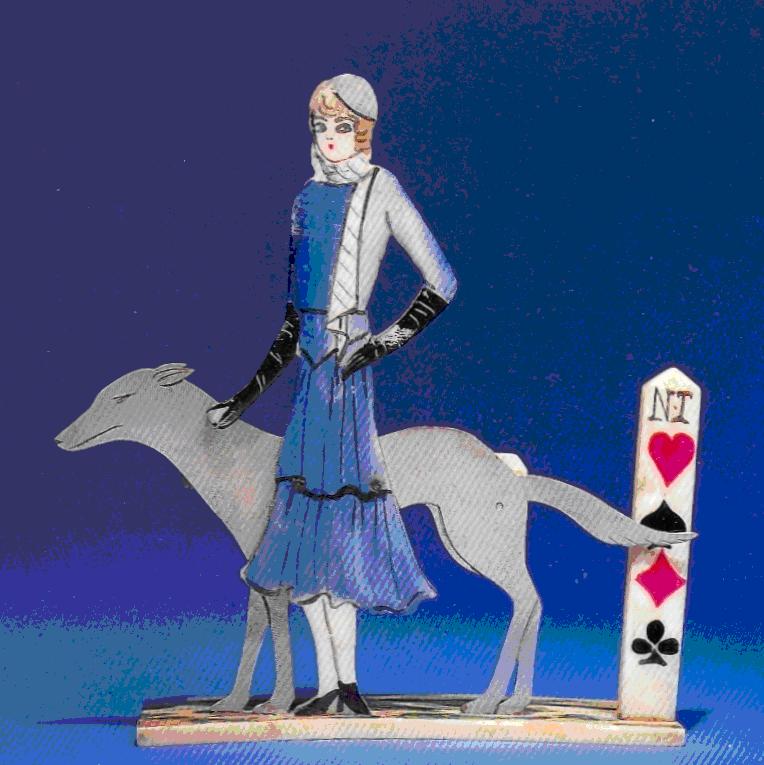 Near the top of the list is a very elegant Flapper Lady with a Greyhound with a long snout and the sleek body typical of the Art Deco period. The Lady is made of ivory and the dog of a smooth silver metal. The dog’s tail points to the suit signs. This particular one was made in France, located in Brazil, and at the time I acquired it, in New York City at the 26th Street Flea Market. I bought it from a celluloid dealer who had found several other wonderful indicators for me. This was before the emergence of eBay and networking was a necessary and important part of finding what you were collecting.

When I had a major museum show at the University of Massachusetts, the curator chose this indicator to be the signature logo for the Exhibit. It was used for all mailings and the publicity for newspaper and antique publications and was professionally photographed and printed on beautiful stock. It made quite a splash.

I have never discussed reproductions before. Though trump indicators are a popular collectible, they do not have the universal appeal that another collectible might have so it would not be profitable to try to reproduce them. Some new ones have been made in recent years, but they were not represented as old – they were originally sold as new.

However I have seen some truly spectacular indicators around, that I believe were “tampered with” or “manipulated” by some good artisans. The best analogy would be an old perfume bottle with an equally old stopper in the top. It is not the original stopper, but it fits and looks authentic, and is probably assumed to be the genuine article. This combination of two old pieces is a “marriage”. 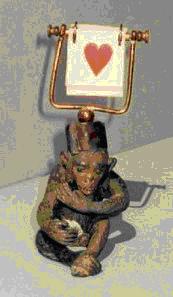 There are some fantastic, one of a kind, figural trump indicators out there that I believe to be a marriage. Many of these indicators are expensive because they are made of old, unusual figurals and many are made of semi-precious metals. To this, an original set of suit cards is soldered on or attached skillfully to the body of the statue.

One of my favorite indicators is one I was highly suspicious of when I purchased it. This one was irresistible to me because it was a small statue of a monkey holding playing cards, and seriously contemplating his hand. The suit signs were welded on top of the hat on his head. As a bridge player, and as a collector of all advertising of Schepps’ Cocoanut (no relative) which uses monkeys as their logo, this was a must have for me. While I do not condone the practice, I really do like this piece, and whether this indicator is an original or a creative combination of two old pieces, it makes me smile every time I look at it. It is very high on my list of favorites. 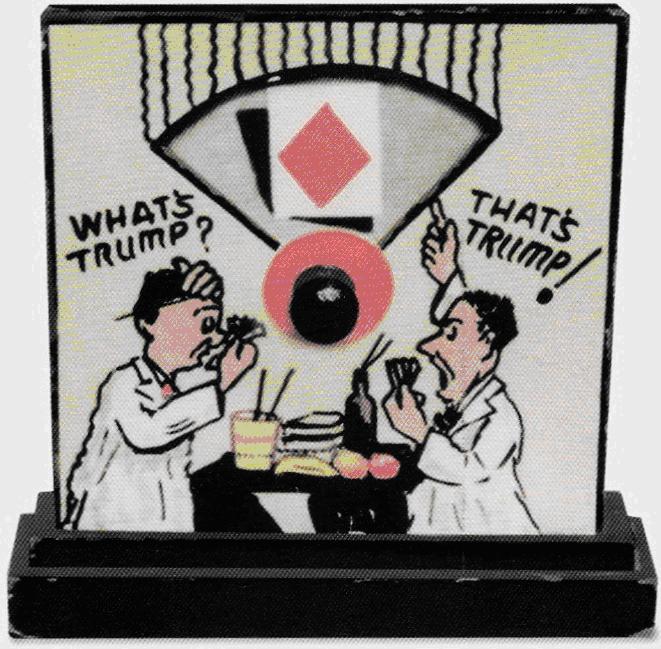 Another one that tickled the fancy of a museum curator was a hand-made indicator. This piece of Folk Art was used by the Wistariahurst Museum, in Holyoke, MA for an exhibit of my collection. I was very glad they chose this one for all their publicity as there is an interesting story as to how I acquired it. It was in the early days of eBay and one of my first acquisitions on the internet. Unfortunately, we had an important social event at the very time the auction for this piece was ending, and as I wanted to bid on this, this was a serious issue. I happily found out my host had a computer, and I made arrangements to leave the party, go into his study, and successfully bid on this piece.

It is a large indicator about 7 inches high and hand painted. It is true Folk Art. When you turn the dial you will find the spade is upside down! It is funny and amusing and is a real treasure in my collection.

Of great satisfaction to the collector is to have something that is very RARE, even though occasionally something ordinary is more attractive. For example we collect Royal Bayreuth figural creamers, and the Platypus is a rare piece. It is not very pretty and was not popular when it was originally made in the 1800’s. However, because it was not a big seller, fewer were made and today it is considered to be rare. The Elk which is rated a 1 or 2 on a scale of 10 is beautiful, but as it was made in such large quantities, it is readily available today, and is considered an ordinary piece. 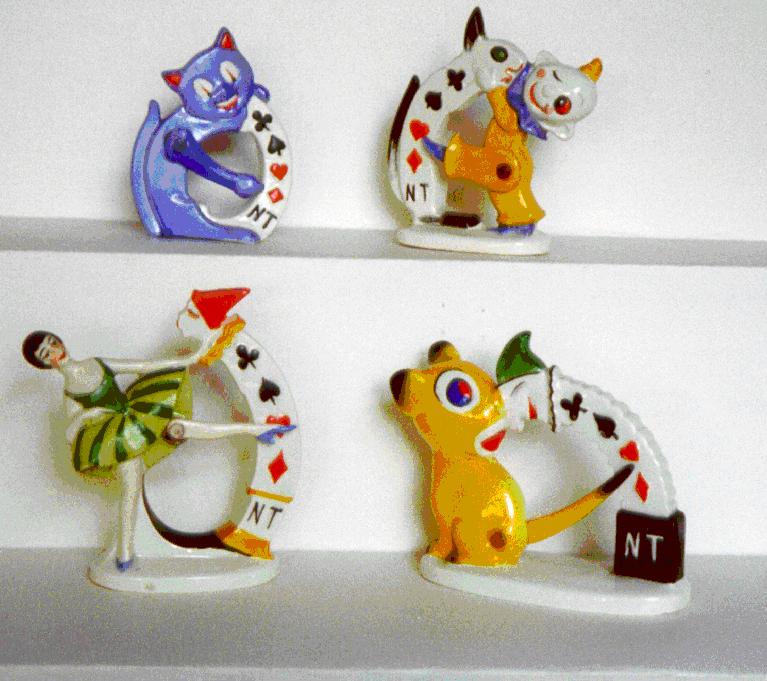 The Goebel Company made four porcelain Trump Indicators from 1926-1928. According to the Goebel Research Department, in the Goebel numbering system Trump Indicators were labeled with the letters “KZ” which stands for “Komische Zweck” or “whimsical items for a special purpose.” They were discontinued in 1936. These are very rare and it was a long journey for me to acquire all four. I still get a great deal of satisfaction when looking at this set.

I met many collectors during this search, including both Goebel collectors and Cat collectors. These were the only documented TIs I knew about and this was the only time I knew specifically what I was looking for. The search was long, and took a lot of detective work but these four Goebel trump indicators are finally together again! 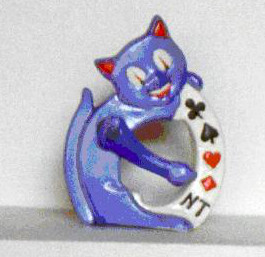 This Blue Sitting Cat was sculpted by
Karl Simon in 1927. 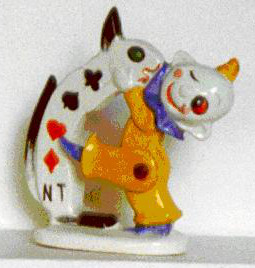 Dancing Pierrot was done by
Rheinhold Unger in 1926. 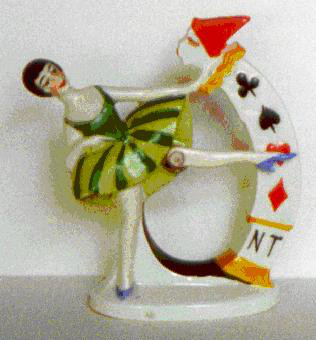 This ballerina was sculpted by
Unger in 1928. 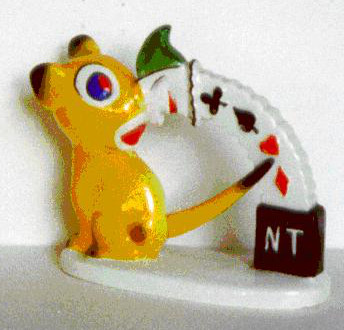 This Mouse was sculpted by
Unger in 1928.

Editor’s Note: The Goebel Company dates back to 1871 when Franz Goebel founded the company which was situated under the Coburg Castle in Bavaria. In 1879, the Duke and Steward of the castle granted permission for the family to build their first kiln. Franz Goebel invited his son, William, to be his partner and together they committed to being innovative producers of fine porcelain. 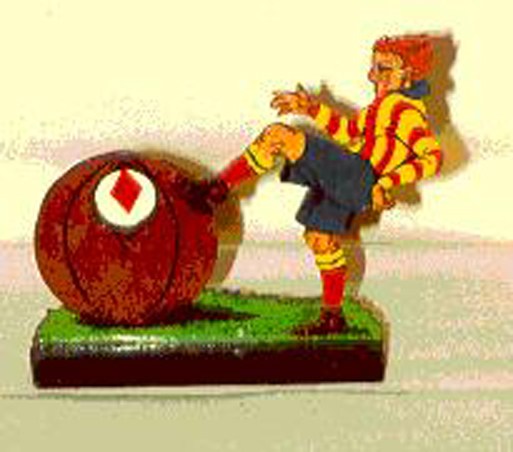 The cleverly designed beautifully executed Soccer player was acquired from an English dealer and is so utterly charming that it immediately became a favorite. It is hand made of wood, and painted in bright colors. The artist’s name, Miss B.E Shaw, and Liverpool are handwritten on the bottom and a notation this was a commissioned order for four indicators. No Trump is designated as a 0. 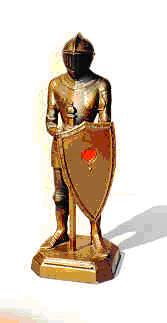 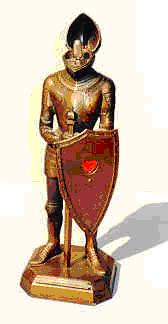 The figural knight indicator stands 9-¾ inches high on a four-inch base and is bronze finish over white metal. At his feet, across the front of the base, is a match striker. The first picture shows the helmet closed, the second with the helmet lifted, exposing the cigarette lighter. This indicator “has it all”. 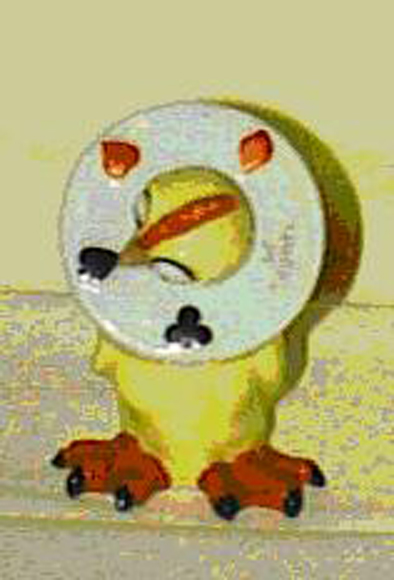 And of course, the first piece of any collection always has a special place and a little porcelain chicken with a clown collar (it was made in Japan) started it all. I found this at the famous Brimfield Flea market before I had ever heard of trump indicators. I purchased it only because of my attraction to anything with a playing card motif, (a direct result of my passion for playing bridge). It also aroused my curiosity as to why this piece had the symbol for NT (No Trump) on it.

So with this porcelain chicken, a collection was born, and was joined over the years by many other delightful members of my trump indicator family.

Editor’s Note: Thanks Joan, these Trump Indicators are wonderful. With your huge collection I don’t know how you could possibly choose so few.

Joan Schepps holds the rank of Silver Life Master. She founded the Holyoke Bridge Club in Holyoke MA, and wrote a bridge column for a local paper. Her collection of Trump Indicators is the foremost in the United States. This collection was on exhibition at the World Bridge Olympiad and is written up in the Official Encyclopedia of Bridge, as well as the American Contract Bridge League Bulletin and other bridge publications.