Anytime there is a game, a contest, or a competition of any kind, there is a winner and a loser. To keep track of who wins or who loses there needs to be some form of scoring. Whether the game is physical as in sports, or mental as in card games, a score is kept as a measurement of results. When you play Contract bridge, whether you are playing Duplicate, Rubber or Chicago, you keep score. The way it is scored and the amount of points one wins may vary, but a record of the results is kept.

Score pads were used to record the score for the game of Whist and bridge, and were an important accessory to the game. As a trump indicator was also an important accessory to the game, many pads had a trump indicator attached and the indicators were cleverly incorporated into the design of the scoring device. As always, the indicator covered a variety of themes: animals, people and any other subject that was timely.

Some score pad covers were elaborate and highly decorated, others were simple. Some paper and cardboard ones had beautiful graphics. Some were commercially printed. In the heyday of the games of Whist and early Bridge, a myriad of score pads were produced made from every material you can think of: Bakelite, celluloid, sterling, leather, various metals, paper, cardboard or wood. Of course on occasion, a random piece of paper had to do, but the score must always be kept.

There were score “boards” made of thick Bakelite/celluloid, with trump indicators at the top. This gave the players the added advantage of seeing the score and knowing what trump was at the same time. These scoring devices were reusable, as the scores were written in pencil directly onto the surface of the celluloid and could easily be erased with a cloth. Many came with long, thin pencils which fit into a loop or some type of holder on the side of the scorer. Many of these devices were found without the pencil. These boards had to be a very popular way to keep score as a great many of them have surfaced.

The following pictures are of this type of either celluloid or Bakelite score “boards” from the collections of Joan Schepps and Gerard Hilte. They are similar in size, measuring six to seven inches long and four to five inches wide. They probably date during the 1920’s and 1930’s as much of the art work is typical of the Art Deco period. 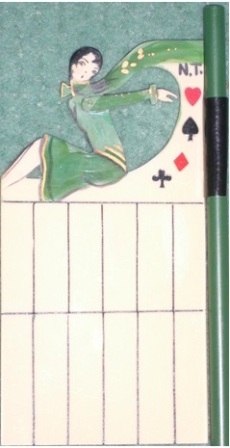 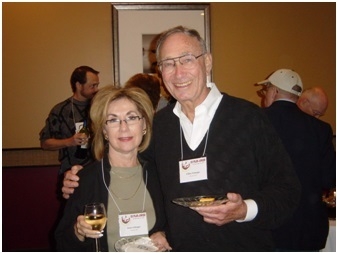