If you are making some progress in your bridge career you will know that all your partners and friends want to play lots of bridge conventions. Even if you are just starting out you have likely already encountered some basic conventions like Stayman and Jacoby Transfers. I think that I must play more than twenty conventions. Expert bridge players use a much more complicated and rich bidding system than experts of fifty or even twenty years ago. New bridge players start to add conventions very quickly. Is this all a good idea?

First the negative side: the more conventions you add the more you have to remember and the more likely it is that either you or your partner will slip up and forget the convention or not fully understand it. Some conventions have several variations and you may find that you and your partner are not on the same wavelength if you don’t have a complete discussion. Not long ago I was looking at a report on the finals of a major expert team event. One pair got to a grand slam and went down because they were missing an ace. One partner had asked the other, using a variation of the Blackwood convention, how many aces he held. However, there was some confusion about the use of this convention.

On the positive side, adding conventions makes your bidding much more accurate and takes out some of the guesswork. It also is a lot of fun. One of the earliest conventions most people play is Blackwood, which is used to ask partner for aces (as mentioned above). This comes in very handy when you have decided to play a slam but don’t want to be embarrassed (like our experts) by finding out your opponents can beat you by taking too many aces. Almost every bridge player in the world uses Stayman (or some variation of it) to check for a major suit fit after partner opens 1NT. But there is a whole world of other wonderful conventions for you to try with your favorite partner.

One convention that I like, and recommend beginners add very early on, is Jacoby 2NT. You use this when partner opens one of a major and you have a fit for his major and enough points for game (or even more). It is designed to allow you to explore the possibility of a slam.

A more advanced convention that is very important is the Negative Double. This is used when your partner has opened the bidding and your opponents overcall. This allows you to show partner that you have an unbid suit (usually a major) even when you do not have the values to bid it at the two level. I first encountered negative doubles when my husband and I started playing bridge again after a lengthy absence in the early ’90s. We had never played them before and we debated whether they were any use or not. Now we can’t imagine not playing them.

When you decide to play a convention make sure you understand it thoroughly. Walk through all the ways you can use it. Some conventions can seem simple but there is often a bit more to them.

Here is an example using the Stayman convention:

What does 3♣ mean? Some people play that to be weak; partner wants to play in 3♣, please don’t bid again. Some people play that as invitational asking you to bid 3NT with a good club fit. So when you decide to play a convention walk through it carefully with your partner. Look at the responses but also look at how you continue after you bid and respond to the convention.

It is a good idea to practice the new convention before you launch it in a real game. Try dealing out some practice hands. It may take many weeks for the convention to come up 15 or 20 times in but if you can find some hands which incorporate the convention then you can practice it 15-20 times in an hour or two. 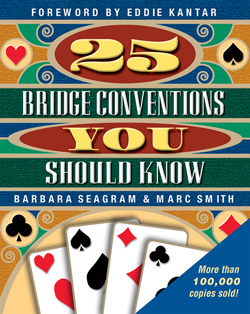 The Internet can help you to find a lot of information about conventions. You might also want to buy a book and I can’t think of a better one than 25 Bridge Conventions You Should Know by Barbara Seagram, an American Bridge Teachers Association Award prize winner and the best selling bridge book of modern times.