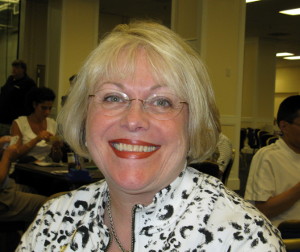 Since becoming an ACBLTeacher in 1987, Betty has taught bridge around the world, and trained scores of new teachers as a Senior Trainer with the ACBL Teacher Accreditation Program (TAP). While living in Japan, Betty also completed the considerable task of revising and updating the ACBL Teaching Bridge Series.

These days, Betty is busy working on her own bridge game, teaching and mentoring, and coordinating the ABTA Master Teacher Program. Here, Betty shares some of the insights she has learned over the years, and across the continents.

To read a Q&A with Betty Starzec on the Master Teacher Program, please visit abtahome.com.

How did you learn to play bridge?

I learned how to play bridge in 1974. I was living in Denver at the time, and I learned from a Life Master. It was a terrible experience, because [bridge teachers] didn’t know at that time how to put cards on the table in a lesson. So I was given a piece of paper, and she just kept talking, talking, talking, and it wasn’t until lesson two that I realized that there were two parts to the game, bidding and play! I did it because my husband could play, and all my neighbors played, so I said to myself, ‘I’m not that stupid—I’m going to continue with this!’ But I know that this was an issue from the ACBL’s perspective, and that was one of the reasons why they had Audrey write her books. They realized that 60% of bridge teachers were losing their students because of the way they were teaching.

In your role at the ABTA you’re the head of the Membership Credentials Committee, the committee which evaluates potential Master Teachers. What do you feel are the qualities of a great bridge teacher?

It runs the gamut of so many things, from being a good listener and knowing your stuff, to having a functional understanding of time management.

One of the most important things , especially for those who are teachers outside of the realm of bridge, is that bridge teachers have to realize that they are in (what I like to call) edutainment. You are educating, but you are also an entertainer, because your students are using their entertainment dollars to take your class. And if they don’t have a good time, they’re not coming back! And as a teacher, you need to understand that, for many students, their reason for coming may not even be to take bridge lessons, it may be because they’ve had a different life experience. For example, you’ve lost your husband, you’ve just retired, your kids have gone to school…and what you’re looking for is to make new friends. So doing everything you can to make your students friends, that is crucial.

Also, you never put people on the spot. Audrey [Grant] always says, “if I ever ask you a direct question, I have a dollar in my pocket, and it’s yours.” I think student safety is a critical thing: [as a teacher you] need to communicate to students that they have safety in your class, and that they are allowed to make mistakes, and mistakes are a part of the game.

A good teacher also creates an environment where students teach themselves. You put your hands down on the table so they can functionally understand. There are so many principles where you can teach a rule, but cards on the table are much more effective because students figure things out for themselves.

To read Betty’s insights and advice on the Master Teacher Program, please read the Q&A on abtahome.com.

Why did you decide to teach bridge?

My husband worked for Mobil Oil, which became Exxon Mobil, so we moved all around the world. I’ve lived in many places and I’ve played bridge in all of them. So, I was living in a remote town in Indonesia, and playing bridge, and when you’re living in these remote places, your kids are going to school, and you have servants to help the local economy, so there isn’t that much to do—especially at that time, before we had computers. I loved to read, and I read a lot of bridge books, and I realized that I knew a lot more than the other people who were playing with me. So that’s when I started teaching, it was around 1984. Then we moved to Jakarta and I was teaching there. I was still pretty young while we were there, and there were so many nationalities in the class, and I felt I needed something behind my name, to say that I knew what I was talking about. So I became accredited with the ACBL material around 1987, just after the accreditation began in 1985.

How have your international experiences shaped you (and your bridge game)?

Those experiences helped me become a better teacher, but hurt me in terms of becoming a better player, because when you are playing with people who are not as good as you are, and you are not that good yet, it doesn’t help you get better. In fact, when I worked for the ACBL as a TAP trainer, I didn’t play much. I enjoyed teaching, and it came to the point where I became more focused on creating new teachers than I was on creating new players or working on my own game. So that’s a bit of a different path. So now I do very little teaching of beginners, I play with students at games, and I do a lot of mentoring and help people one-on-one, or as a foursome, as opposed to big classes, because I am focusing on my own play and getting my own play better.

How is that going, focusing on your own play?

It’s going well. I play a lot and I go to tournaments. I’m heading towards being a Diamond Life Master and I’m playing in national events now, so I’m on my way. I’d like to win a national title, so that’s where I’m focusing my attention right now.

You’ve devoted so much of your life to the game of bridge. Where does your love of bridge come from?

When you’re moving from place to place, you need to make new friends, and bridge is certainly the place to do it. Even in the US, it was always, ‘Where’s the bridge game?’ and, ‘Do you play bridge?’ It creates families no matter where you are. Now at this point of my life, I have kids and a grandchild, and I seem to be playing more bridge than I ever have. It’s fun, though sometimes I think, “It would be nice just to sit home and read a book!”

What is one piece of advice that you would like to share with other bridge teachers or teachers in training?